The building that is home to the Pufendorf IAS was built in 1886 to house the Department of Physics. After that it became home to the Classical Department between 1951–2009.

In 2009, the Pufendorf IAS moved in, just after the building had been thoroughly renovated. The building had needed extensive repairs and a generous grant from the Marianne and Marcus Wallenberg Foundation enabled its transformation into a modern workplace.

When the building was renovated, great importance was placed on preserving and incorporating elements from the layers of history that remained. The original floor has been retained wherever possible and any new flooring has been manufactured in the same way. The theatre balcony on the third floor is original – during the Department of Physics' era it was a vantage point for the physics experiments carried out in the middle of the hall below. The hall, which used to be filled with plaster casts and copies of Greek marble statues of gods and goddesses during the Classical Deptartment's era, is also in use, and is still called the “Sculpture Hall”.

When the Pufendorf IAS moved to the house, most of the statues were transferred to the museum’s premises at Gastelyckan. The Institute was delighted by the decision to allow some of the plaster statues to remain in the building, among others these include the Parthenon frieze, Aphrodite and Artemis, the Oracle, Oinomaios, Hippodomeia and Dionysos and today these art works contribute to the distinctive atmosphere of the Institute.

If you are interested in more contemporary art, visit the Pufendorf IAS on Lund’s annual culture night, "Kulturnatten". We cooperate with the Faculty of Fine and Performing Arts, the Inter Arts Centre, and artists and musicians, researchers and actors perform and present lectures and works in the open house.

Music is also part of life at the Pufendorf IAS. The Sculpture Hall with its high ceiling provides fantastic acoustics. This can be experienced at the series of lunch time concerts arranged by the Institute each semester. String quartets feature most, but woodwind quintets, clarinet and piano quintets have also been on the programme, as has opera and piano improvisation. 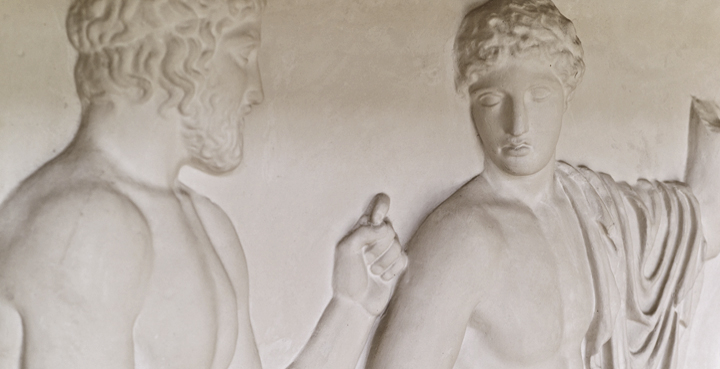